For many of us who read this it will have struck a chord. Our earliest modelling experiences were as youngsters who on a Saturday morning pocket money in hand would rush to buy the latest Models. The name Frog conjures up memories of these trips for the latest offering from Frog or even maybe Airfix. Interestingly both the Frog and Airfix factories were less than 4 miles apart. Frog in Merton London S.W.19 and Airfix in Wandsworth London S.W.18. Amazingly many of the original moulds continue to be used to this day.

The poor model would either end up hanging from the ceiling or be destroyed in a mock dog fight.

This together with the subsequent parental wrath for getting glue & paint on our clothes, the kitchen table, pets, sisters etc. Plus the odd visit to the local hospital having sliced into a thumb instead of plastic.

These early experiences with model aircraft also taught us about aircraft & aviation.  The early style narrative instructions (place the DF loop on the top of the fuselage) encouraged us to learn about the real thing.  How many careers in aviation did these models launch?  Years later many have returned to the gentle art of modelling  having found marriage, mortgages careers and other interests on the way.

To a lot of us it is a sense of nostalgic warmth, a comfort blanket to harp back to the ‘good old days’ when we made that first model. Can you imagine the reaction of today’s youth being given a Frog model and being told to use a sharp knife , toxic cement and a hot screwdriver?  Health and safety would have a fit..  I am afraid Frog cannot compete with the latest XBox or online game. This site is a chance to wallow in nostalgia and remember those day’s when life was just that bit simpler.  You never know this site may even encourage you to build. So instead of adding to that expensive loft insulation why not take that trip down memory lane and build that early Frog kit, after all that is what it was produced for. You may even enjoy the experience. But don’t forget you had no Airbrush, liquid glues or after market parts to help you then. I will bet that the end result will be nothing like the previous attempt.  Above all welcome to the site and enjoy browsing. Did you know that 2 famous names were involved with Frog? Both Neville Shute Norway the famous author who designed Gliders in WW2 at the International Model Aircraft Factory in Merton and Sir Barnes Wallis who advised on the R100 model (F128)

F128 the R100 issued in 1/500 scale in 1965 as part of the Trailblazers range. The Late Sir Barnes Wallis of Dambuster fame advised Frog on the production of this model I am lucky enough to own the original drawings. 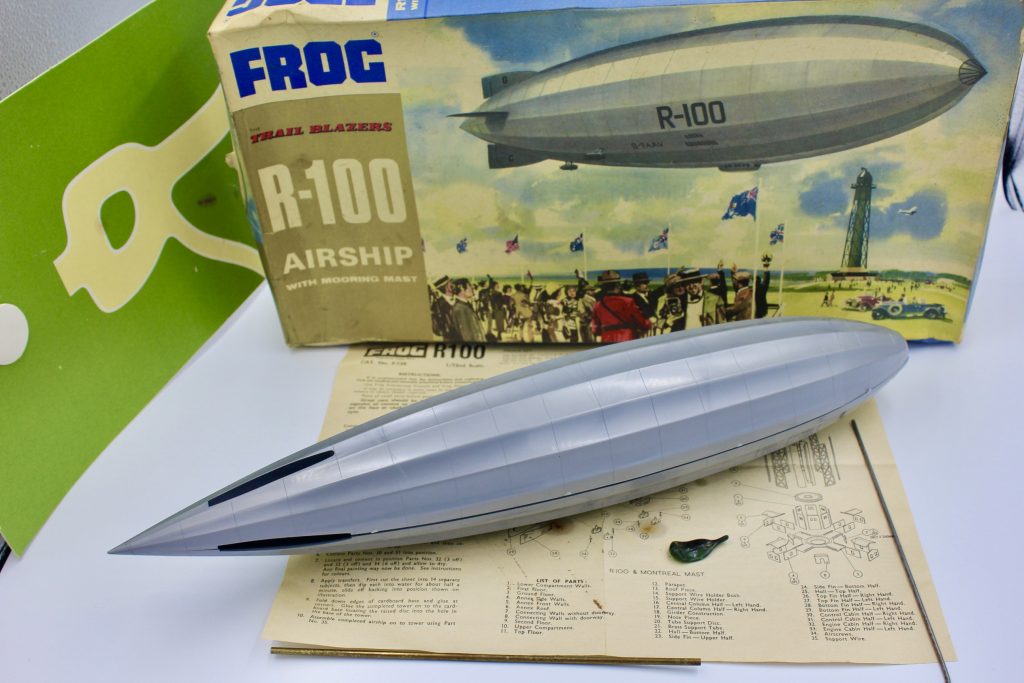 The R-100 in my collection. it is interesting to compare the model with the drawings. 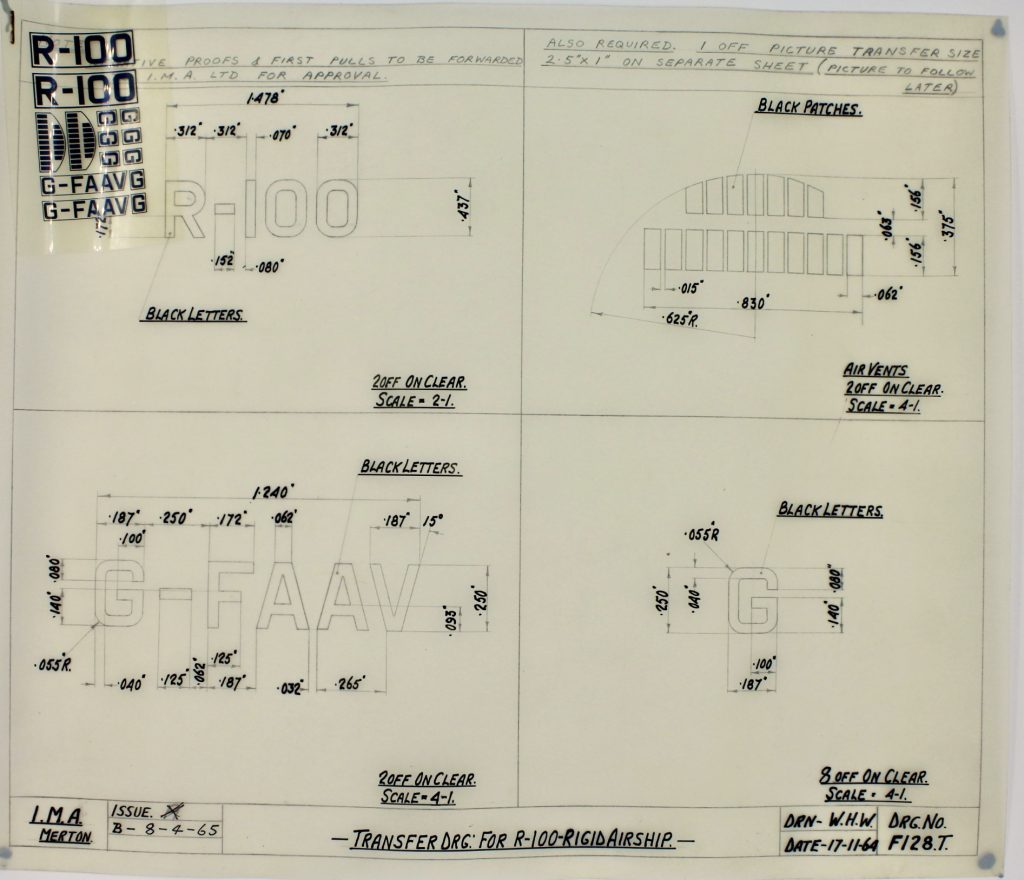 The original Transfer Drawing (Decals) for the R100. This drawing is dated 17th November 1964, and was drawn by W H Willmott as drawing number F128T. It is interesting to note that a “Picture Transfer” (Which was included in the “Trail Blazer” series) was also produced . Attached to the drawing is a Print on plastic, which I assume is the proof for printing. Nearly Sixty years later, the Mould is still being used in Russia. A tribute to the mould makers at Frog.

Among others I hold the Original plans for the Whitley which also is still in production. I hope eventually to put all the plans on the site. 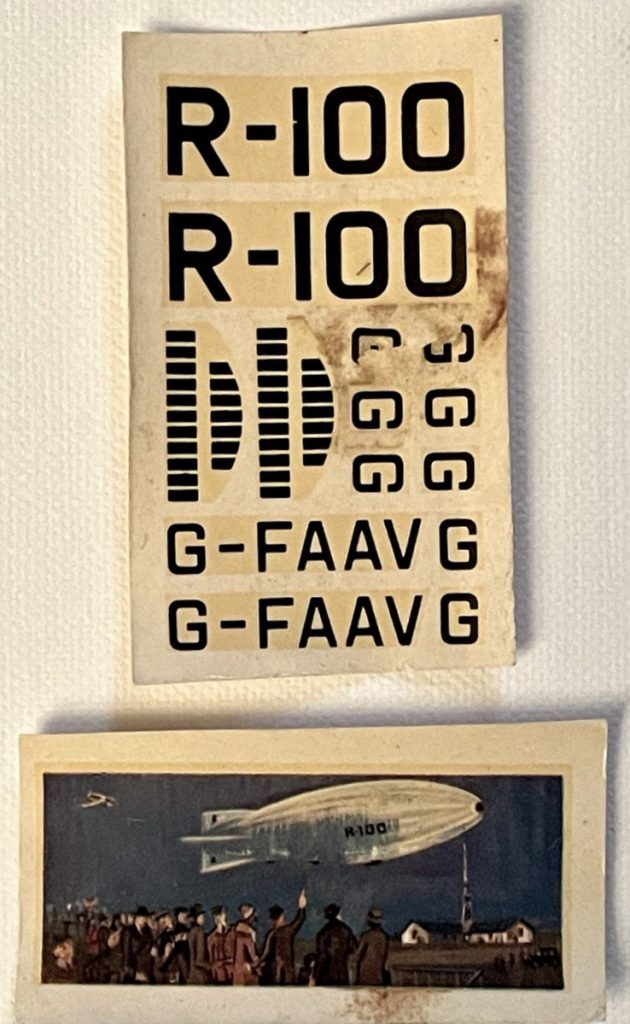 An example of the Transfers (Decals) from a Frog R100 in my collection. I never quite understood what the Transfer Picture was for, it is of a similar design to cigarette cards issued at the time. Each “Trail Blazer” Kit contained one. 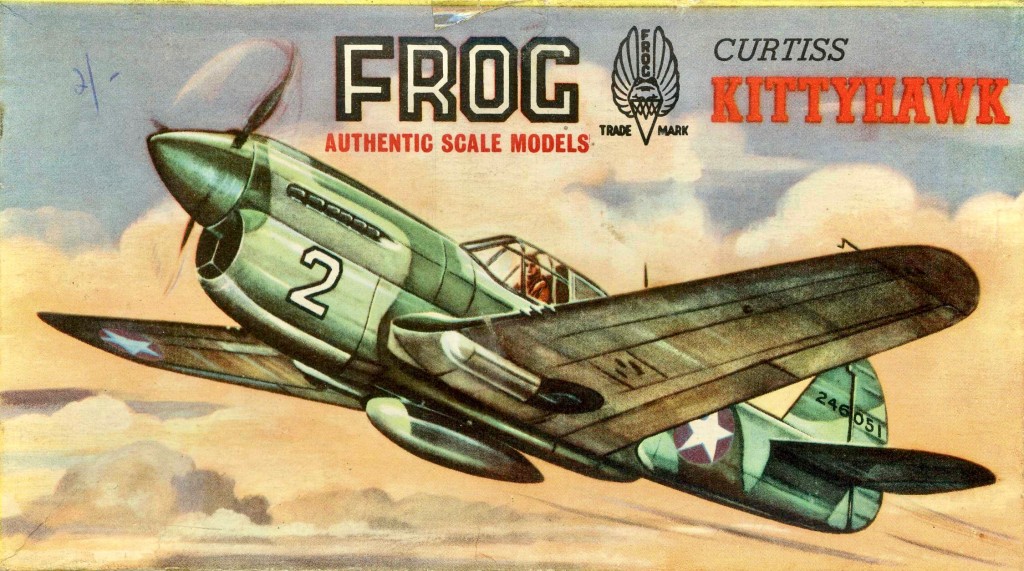 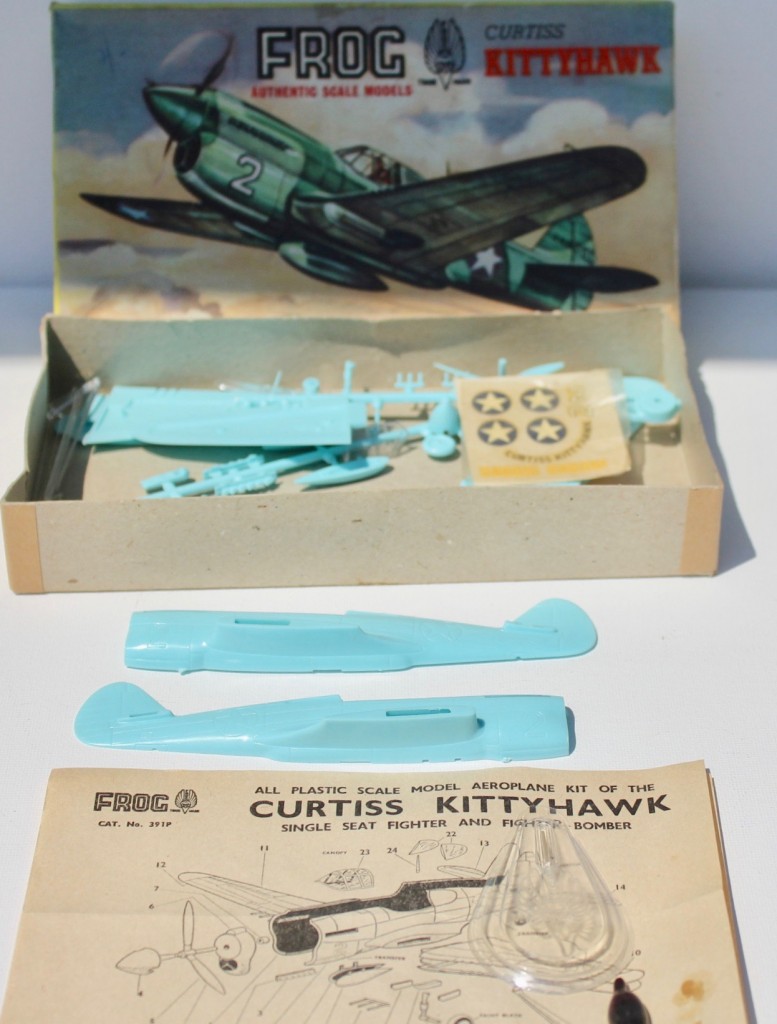 The contents of the Kittyhawk Box, The mystery is why I did not make this model in nearly 60 years?

Introduction to the site

The aim of this site is to document the plastic models produced by FROG from the period of the 1950’s to 1976 as well as the Frog spawn that followed. For those who are interested in the earlier history of Frog and Penguins other than the two features I have included on the site I would recommend the Frog Penguin site at frogpenguin.com. Although the title say’s Frog Model Aircraft both ships and cars are of course included as well as pages on Airfix and Revell from the same period.  Interestingly Airfix have released a Whitley and Shackleton in 2015 both of which were Frog subjects. The Airfix offerings are of course far more refined.  Up until now the Frog versions were the only game in town, and both models stood the test of time and build in to reasonable models. Both are still available.

The site was first created in April 2011 and it’s home is opposite the 18th Century  railway station of  Przemysl  a beautiful Polish City that is over a thousand years old.  If anybody would like to contribute to the content of the site please get in touch. Thank you for your visit and above all enjoy the hobby.

Just a quick note about copyright and sources. All photo’s & models except where credited are from my own collection. Illustrations of period newspapers are the copyright of the publications named and are reproduced with permission. They should not be copied. I have relied heavily on Richard Lines and Leif Hellstrom’s amazing book Frog Model Aircraft 1932-1976 published by New Cavendish books in 1989 a title that every Frog Enthusiast should own. 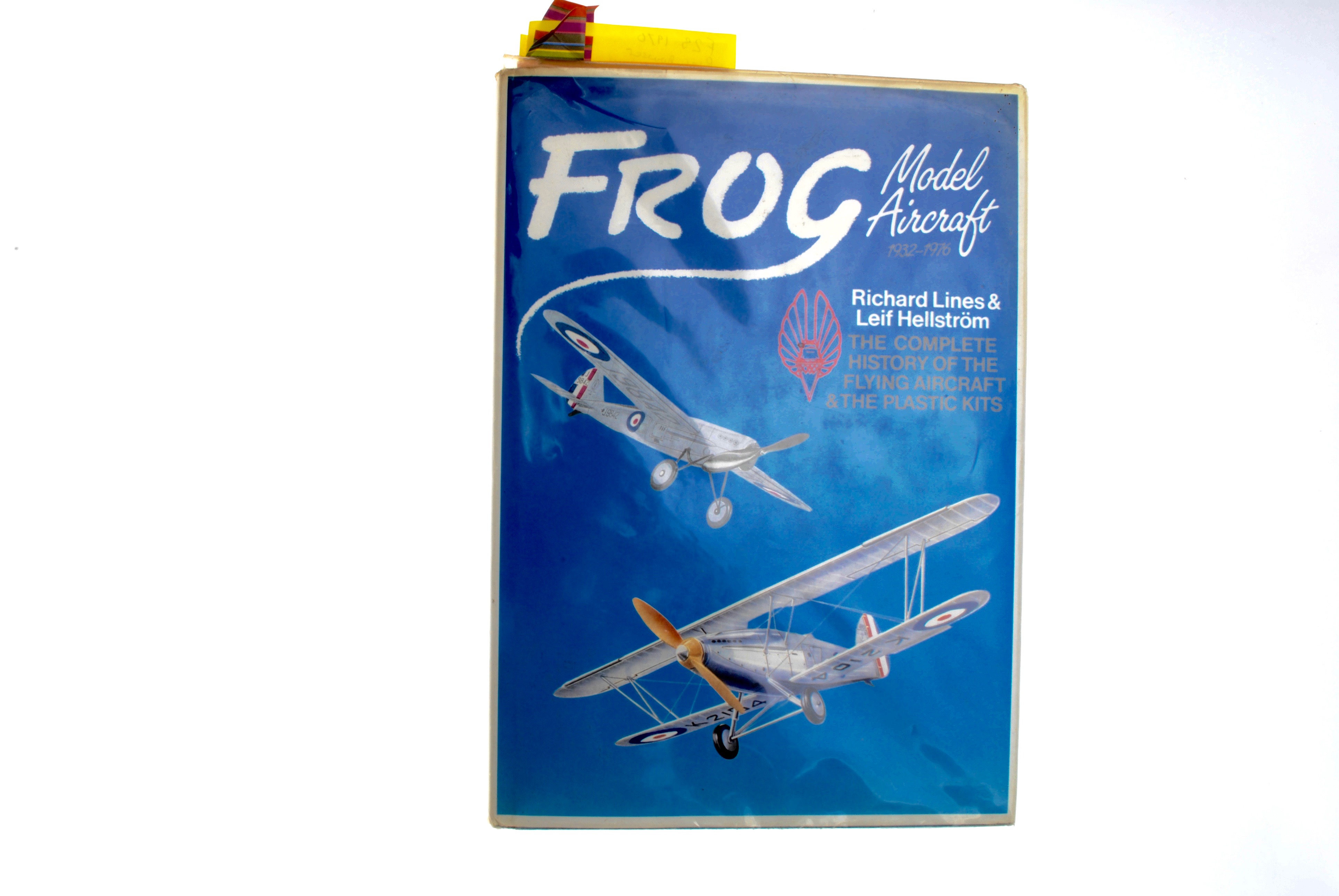 My very thumbed copy of Frog Model Aircraft 1932 to 1976 Note all the markers.
Without this wonderful book this site would not exist 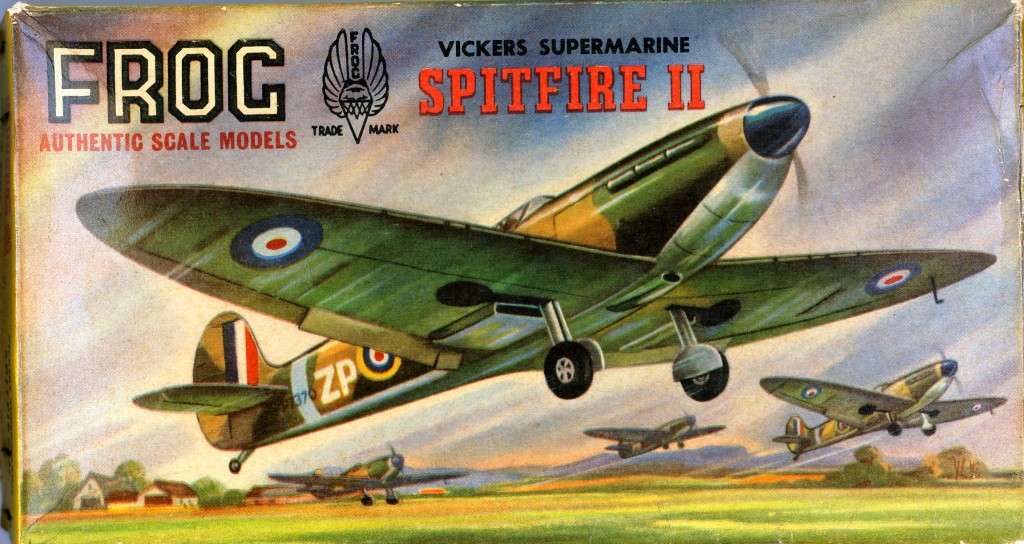 Every Boy’s favourite The Spitfire MK 2 issued in 1959 as 394P This model together with the FW190 were the best selling models in the history of Frog and Total sales exceeded 700,00 kits

F 205 the Dornier D017 first issued in 1971, the beautiful box art shows a Dornier being attacked by a pair of Spitfires over London during the Blitz in 1940

359P, later F359 the iconic Avro Lancaster from 1959. This mould has survived and been re-issued by several former USSR companies, currently ARK in Moscow 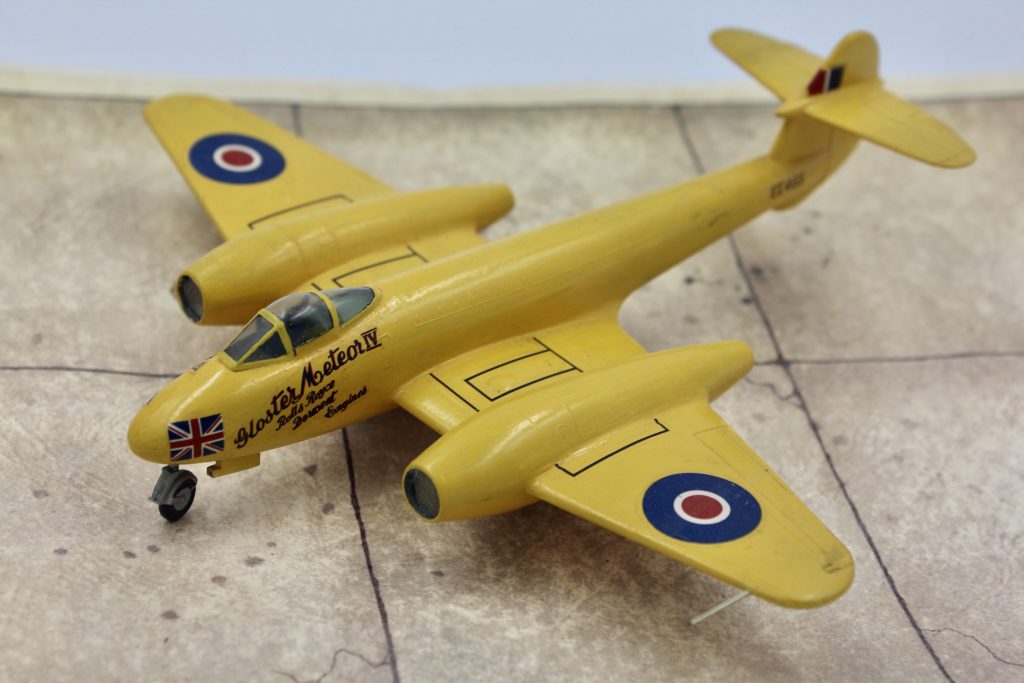 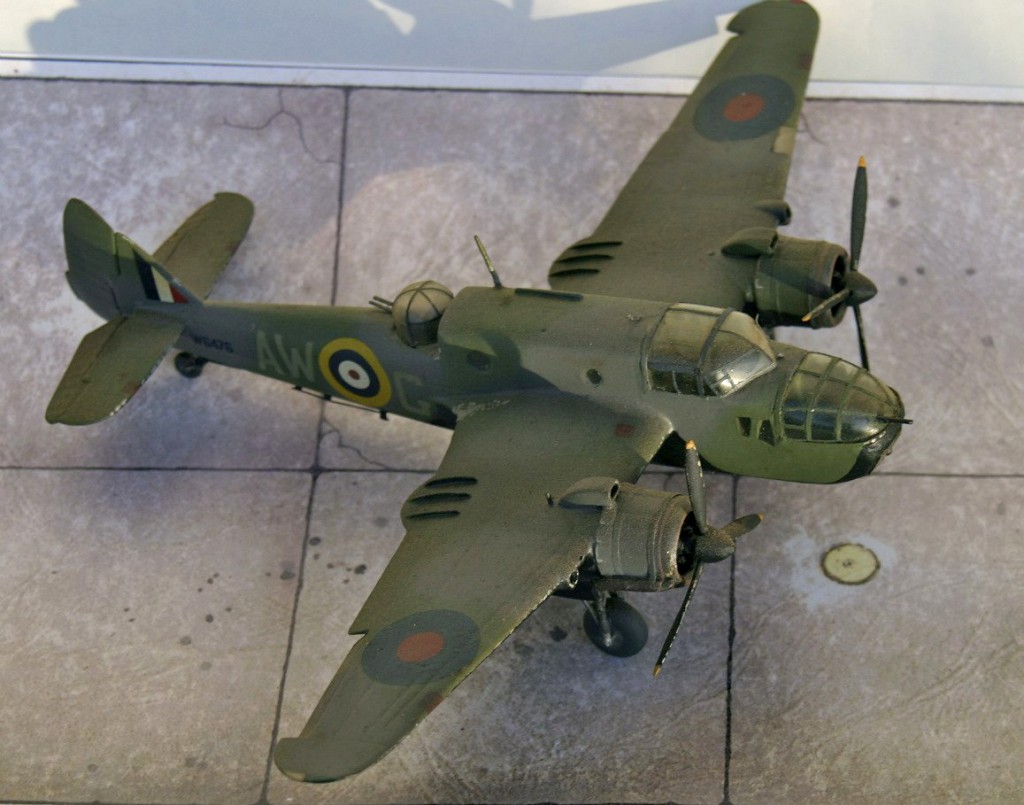 This is what can be achieved from a 40 + year old mould. F229 Beaufort with added details. The decals are the original Frog 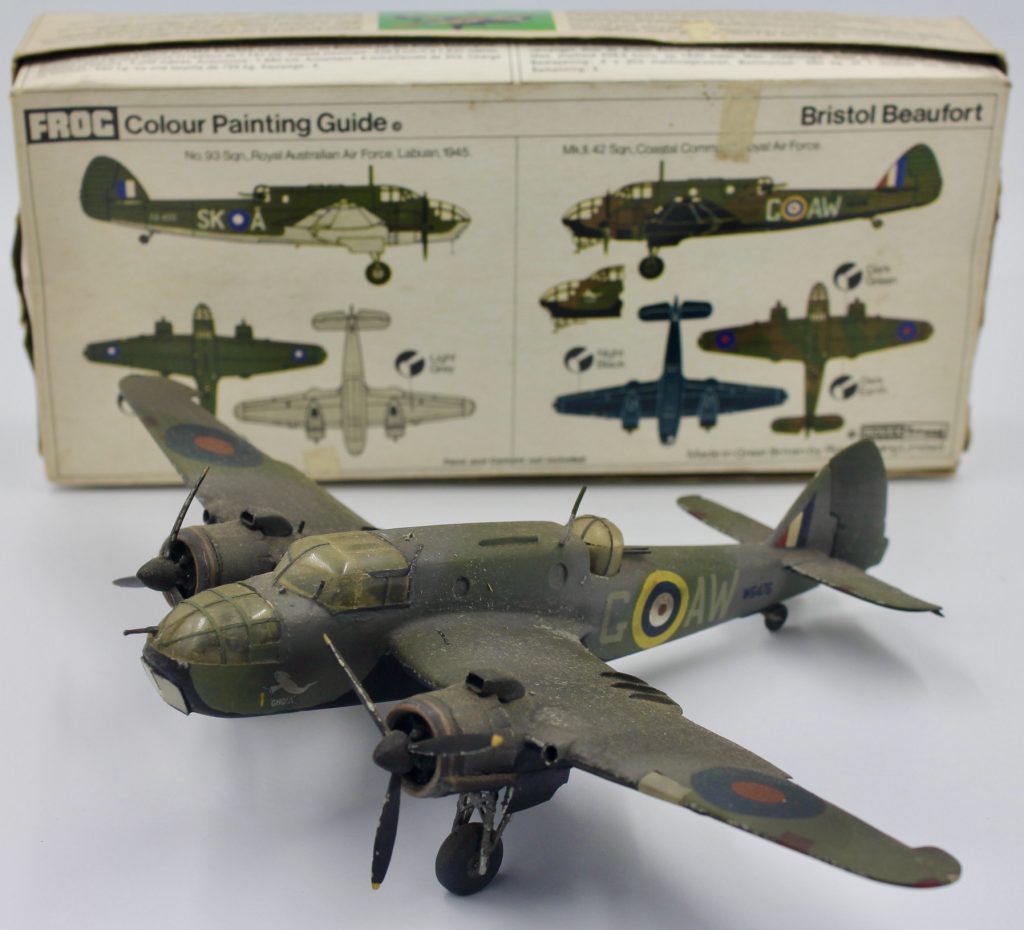 With a bit of extra work this Beaufort is a stunning Model. Airfix have just released a new Kit of this Aircraft 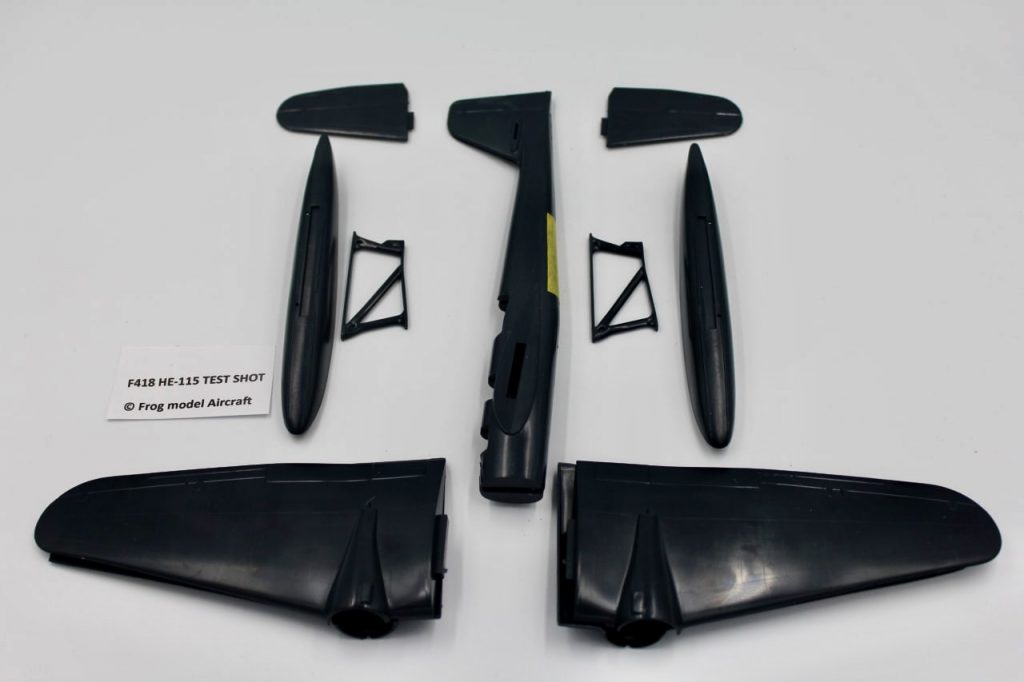 A test shot for the Heinkel 115 that was never released by Frog. This kit was released by Revell in 1976 All Frog test shots were in navy blue plastic and were very crisp. A page will be devoted to this model soon. 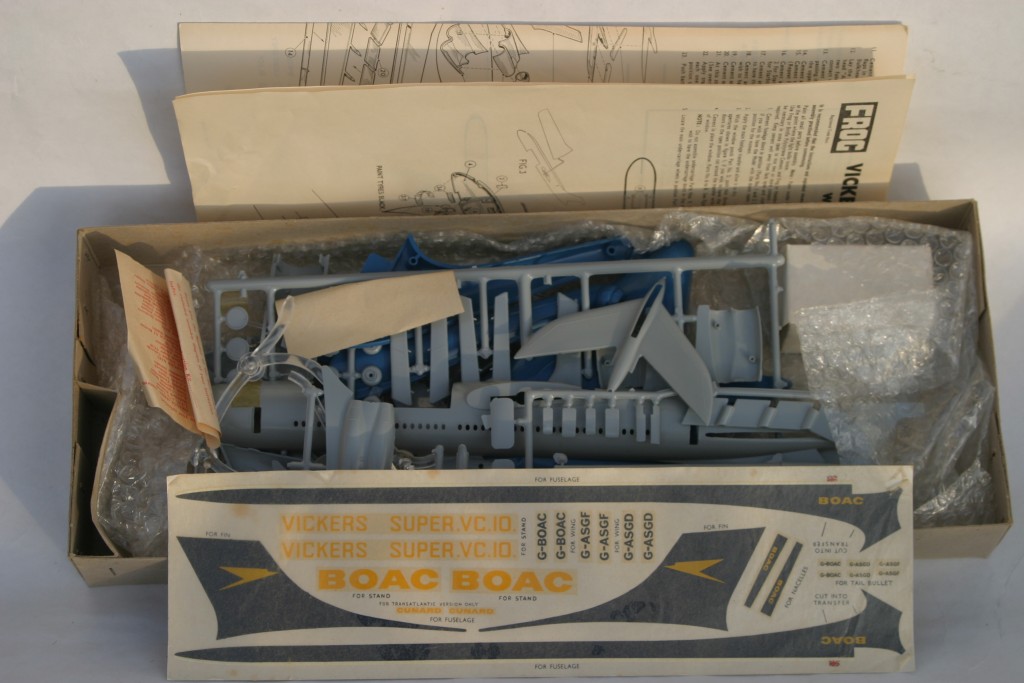 And this is what it is all about… The contents of the VC10, a super model for it’s time now followed by the latest offerings from our friends at Roden. Frog also planned an East African version now also released by Roden (with the authors assistance)

Work is underway on a new book “Merton to Moscow” which will carry on from Richard Lines and Leif Hellstrom’s amazing book Frog Model Aircraft 1932-1976 it will bring the Frog story right up to date and of course cover the many varieties of “Frog Spawn” The title will be published in both English and Polish and will initially be available as an “E Book ” on Amazon. It will include memories of Russian & Ukrainian workers as well as some very rare illustrations. I would be pleased to hear from anyone connected with International Model Aircraft both in the UK and Triang in the UK and France, not forgetting our American friends and Air-Lines. Please use the “Contact us page” if you can help…. Thank you 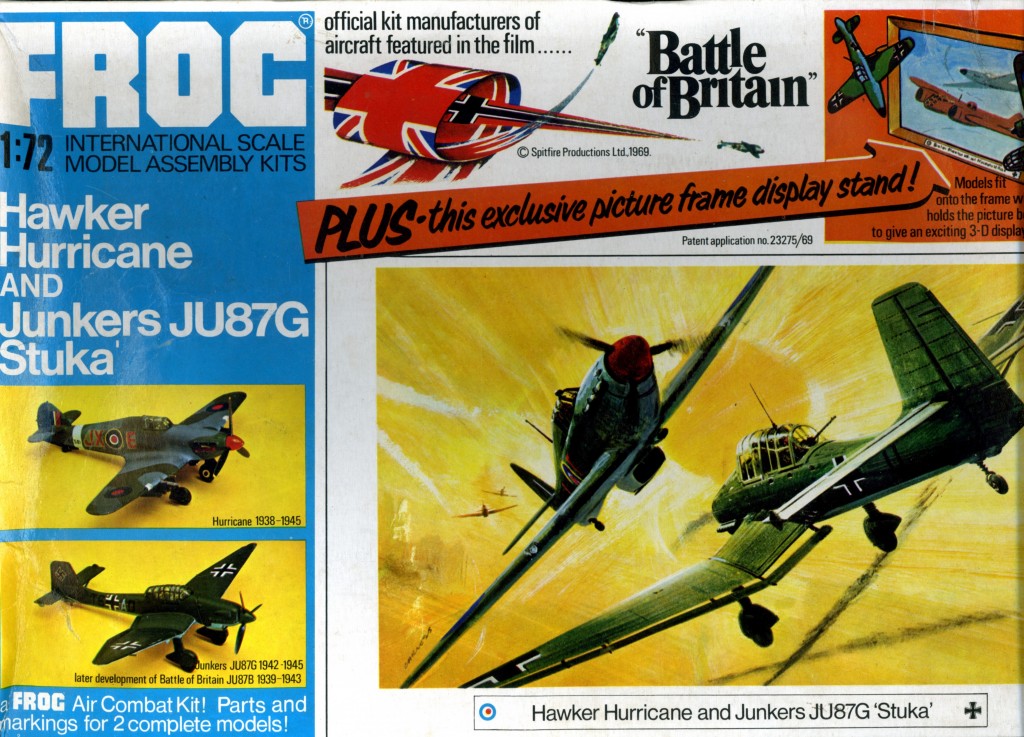 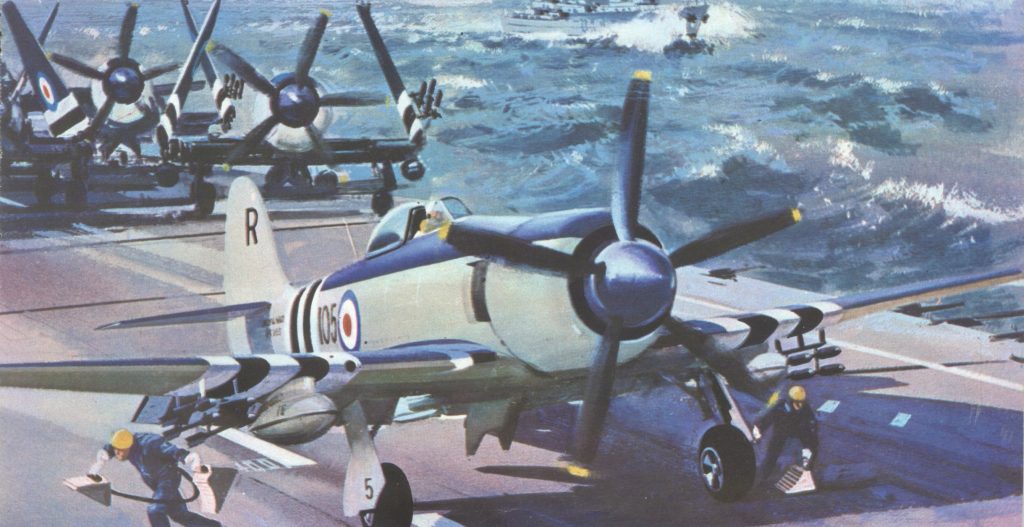 The iconic box art of the Hawker Sea Fury 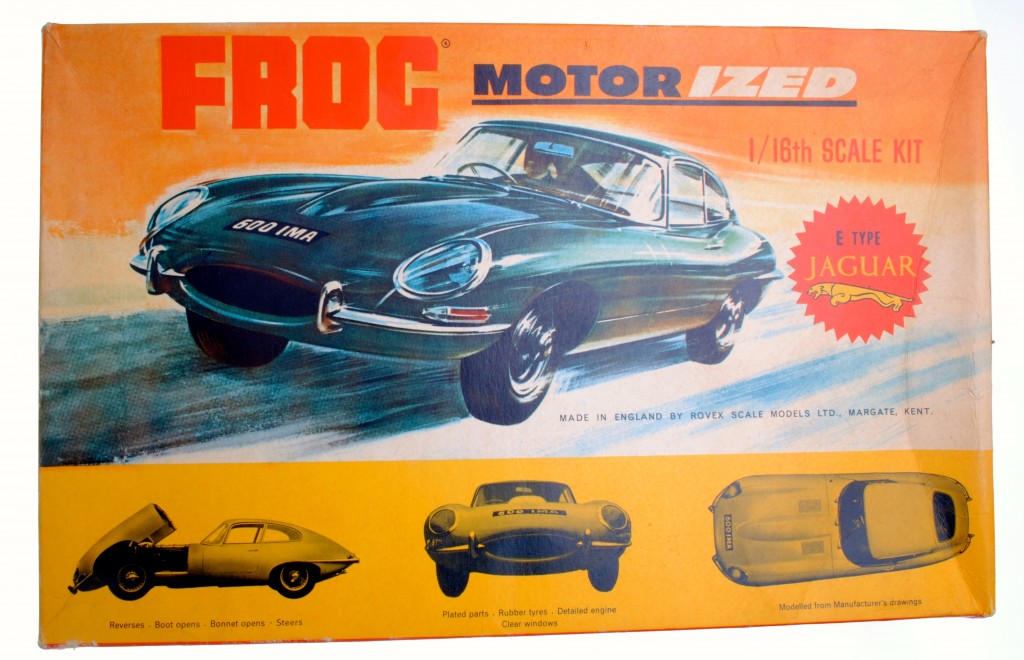 The iconic E-Type Jaguar that was motorised. My own personal connection with this model is, many, many years ago as a young boy I used to cycle to Merton and looked around in the hope of finding any models that may have been thrown away. Much to my surprise one hot summer’s day I was looking in the windows of the packing line, when a very nice Man who was Packing E-Types saw me and handed me one. Yes I had a big problem explaining this to my parents. Luckily they allowed me to keep it. Airfix also occasionally gave free models to local Children . Those were the days ! 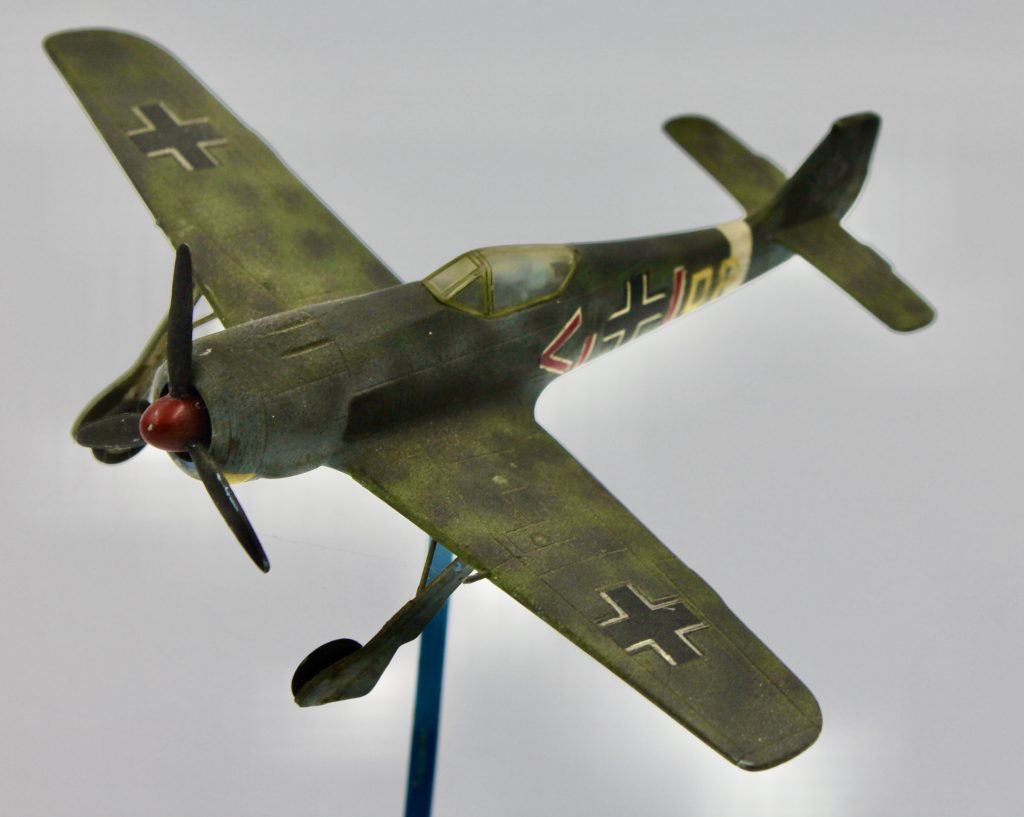 Early issue FW 190, this example was built by me many years ago !

And this is what you needed to put your model together .Note the company name is still International Model Aircraft Ltd. At last the current pandemic appears to be easing, restrictions are being eased and life is starting to return to normal. More people are being vaccinated (including myself) and hopefully we are on the way to beating this virus that has claimed so many lives.We are still seeing  interest from both people new to the hobby as well as others returning who have not made a model since childhood . We have decided to reopen our shop in Przemyśl as soon as the redecorating is finished. We hope to be able to stock a range of both Aircraft and Ship models as well as glue and paints, and detail parts. We also will be launching a web shop as well as Allegro sales. Medyka Bahn will be stocking Model Railway related items.  Opening dates will be announced here

Ship Modellers are not forgotten

If your interest is Railways, please visit our partner site Medyka Bahn

Who we share our shop and office with in Przemyśl 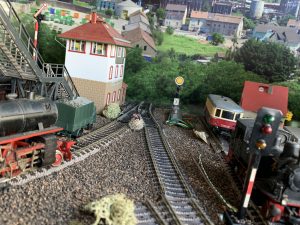 One of the Trail Blazer series the Westland Wallace 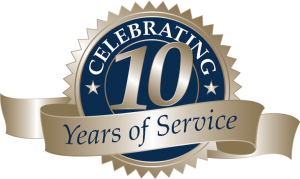 Yes it is 10 years ago since this site first appeared on the net. April 2011