My rather sad looking Beaver GA-LOW was delivered new to Chester from DH Canada in April 1949 and was entered on the UK civil registration list on the 29th April that year. Copy of the CAA registration entry for G-LOW

The Aircraft appears to have remained in the ownership of De Havilland at Hatfield until it was sold in Southern Rhodesia on the 17th October 1952 to Central African Airways, it was subsequently  passed to the Zambian Air Force. Interestingly Frog did not release their model until 1958 using number 384P 30,000 were produced between 1958 and 1964. The model was of a rather odd scale of 1/82. Frog’s model was moulded in a blue plastic and the alleged colour scheme was also blue, this is most likely incorrect as surviving records show the Aircraft in a smart maroon and polished metal livery. It would be interesting to know what research Frog did to produce this model. I am lucky enough to have recently obtained a near mint example for my collection, the decals and instructions are shown below. 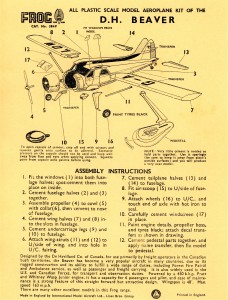 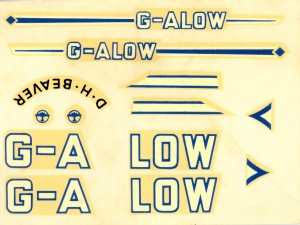 Sadly it is my belief that the mould was scrapped in Calais in 1964 together with other moulds. The photograph’s that follow show the real G-Low and in it’s later guise as VP-YKA The Beavers office. I was lucky enough to fly the floatplane version of this wonderful Aircraft in Canada some years ago..

Any cookies that may not be particularly necessary for the website to function and is used specifically to collect user personal data via analytics, ads, other embedded contents are termed as non-necessary cookies. It is mandatory to procure user consent prior to running these cookies on your website.