Frog announced in the beginning of 1964 a new range of 1/72 Aircraft to be known as ‘Trail Blazers’. These were models of aircraft that had become famous for feats of aviation such as the Bleriot that was the first aircraft to cross the English Channel in July 1909, the High Altitude record in 1936 by the Bristol 138, and the Schneider Trophy outright winner in 1931.

Five Trail Blazer models were released in 1964 followed by four in 1965 and the final two in 1966. The full list is as follows:

It is worth noting with the exception of the 1966 releases all the Trail Blazers carried ‘Gold Tokens’ a reward scheme introduced in April 1964 which when collected could be redeemed for gifts 15 tokens for instance would get a “Chuck Glider” 30 a book on speed record breakers and 45 a Junior sailplane kit. The tokens were printed on the instruction sheets and had to be cut out. When the scheme closed in December 1965 a lot of models appeared with stickers on the boxes stating “Gold token scheme now discontinued”. 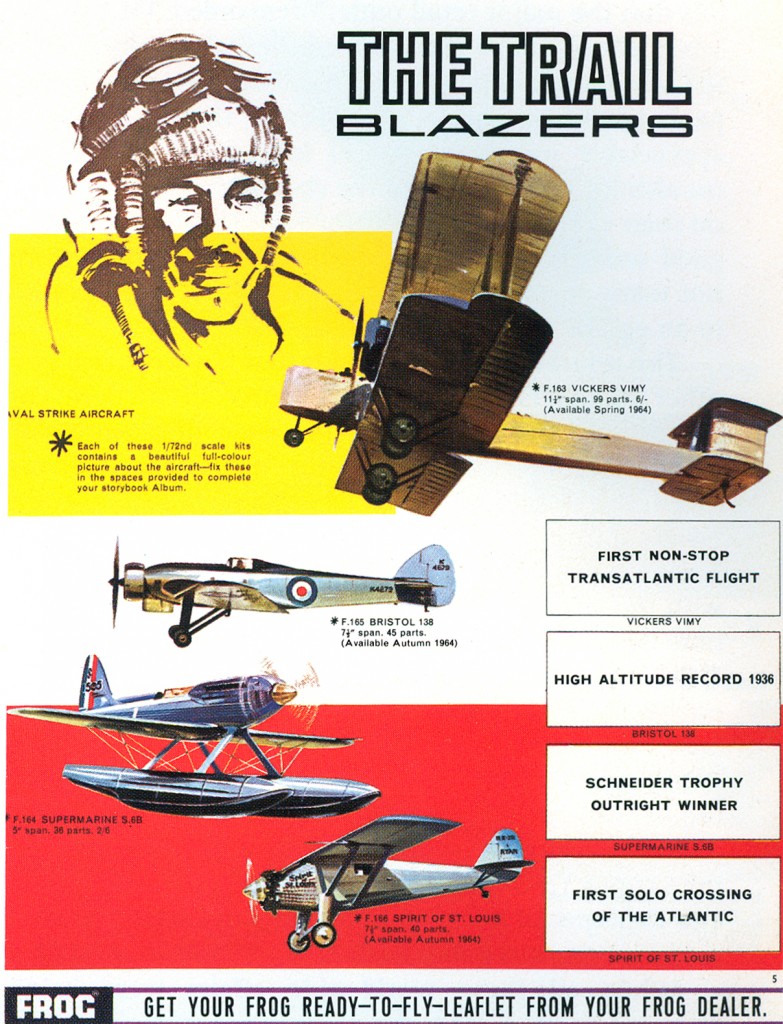 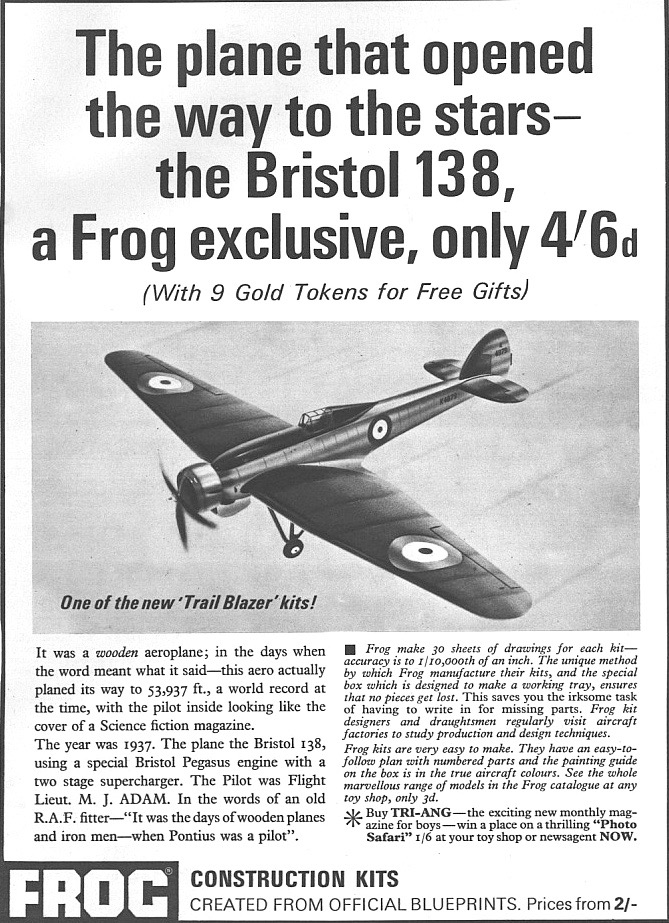 The S6.B was issued by Frog in Early 1964 as F164 it was, the only model in the purple series and the first Trail Blazer. The bottom of the box was plain and did not have any printed painting instructions. It later became part of the Black series. The model represents the famous racing seaplane designed by R J Mitchell, who of course later designed the Spitfire. The S6B won the 1931 Schneider Trophy outright. The S.6B marked the culmination of Mitchell’s quest to “perfect the design of the racing seaplane” and represented the cutting edge of aerodynamic design for the time. A true Trail Blazer. 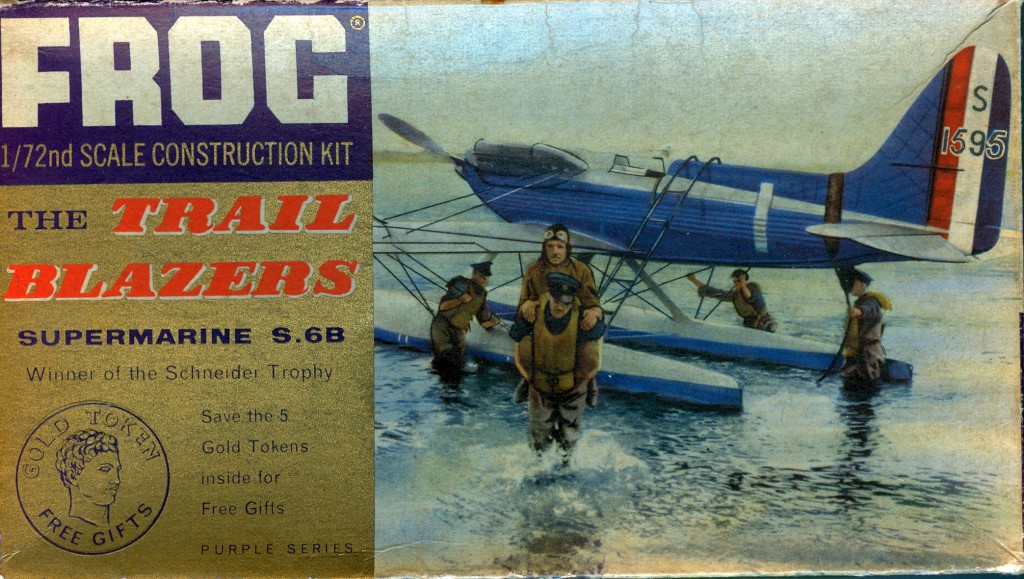 F164 The only model in the “purple series” Luckily this mould survives and is still in production to this day. 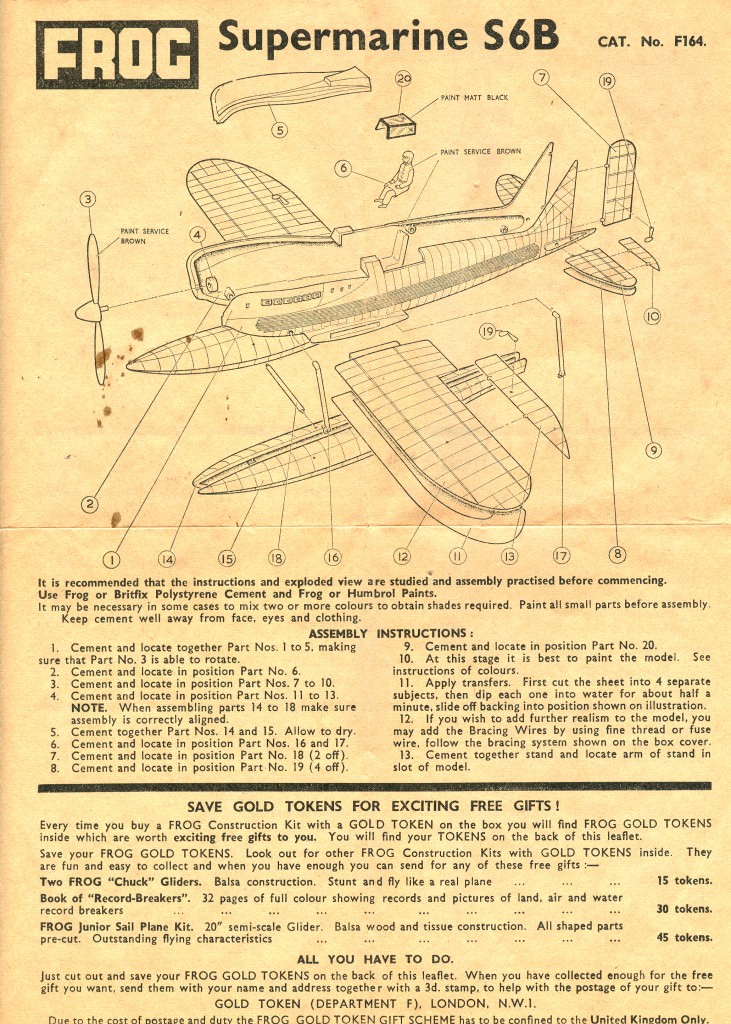 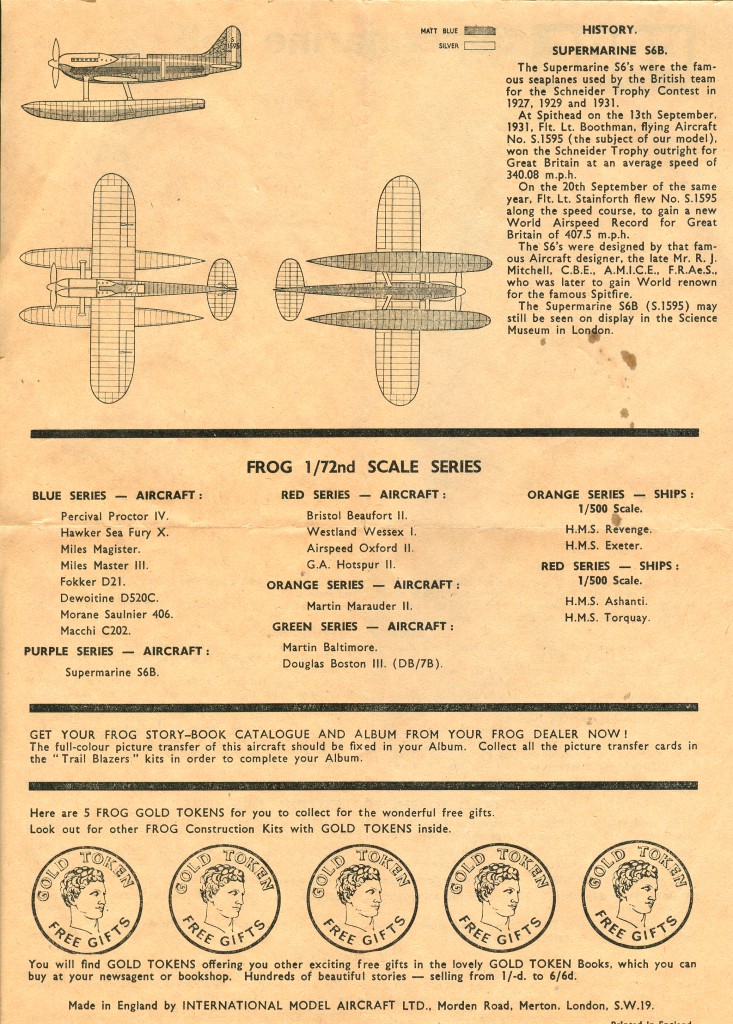 The rear of the instructions showing the “Gold Tokens”. Note the very limited range at the time in 1/72 (1964). Note Frog’s very interesting history of this aircraft. 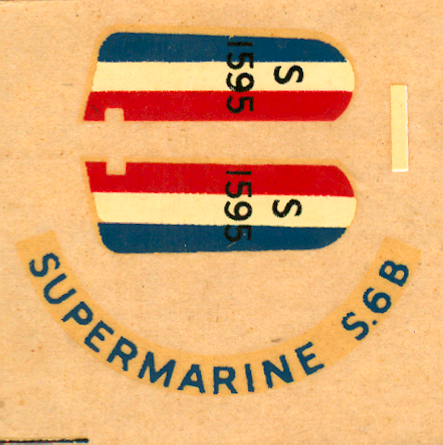 Sixty one years later and these decals appear usable.

The rather odd Transfer that was included with all the Trail blazers . This is the S6B’s offering

Luckily the mould still survives in Russia and is produced to this day. A legacy of the Merton to Moscow deal. I have some original photos of this iconic Aircraft in my collection and will make them available on this site at a later date

The Bristol 138/A was issued by Frog in the Autumn of 1964. The model represents the aircraft that obtained a World record at the time of reaching a height of 53,937 feet (16,439 meters). Luckily this mould has survived and is still in production to this day. The example in my collection is still mint. 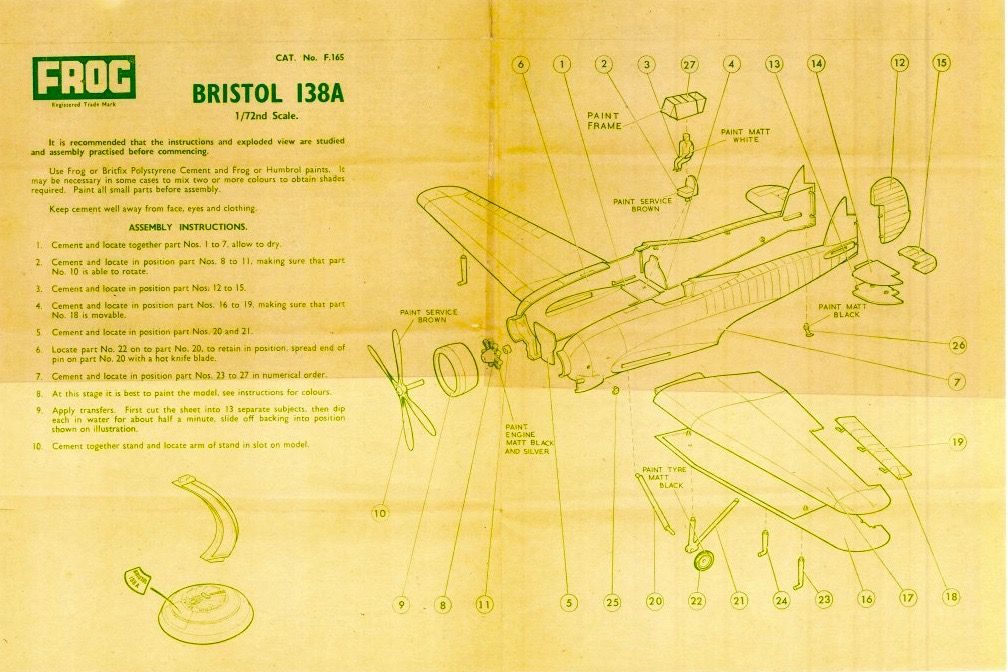 The clear and concise instructions for the 138 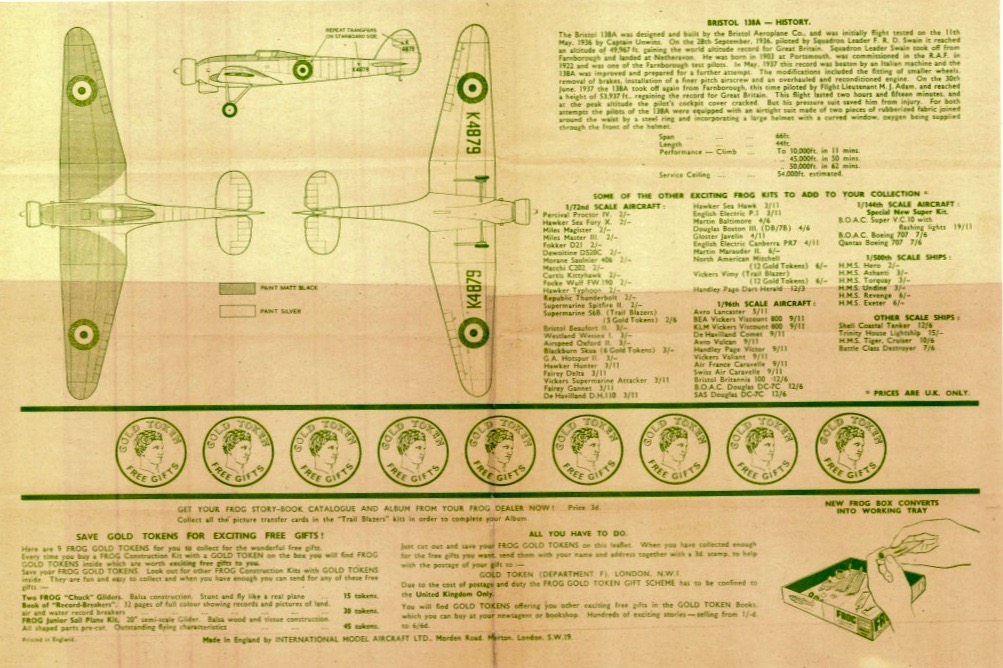 The rear of the instructions showing the “Gold Tokens” and the history of the Aircraft.

The bottom of the box, that shows the painting instructions. Note the pilot figure in his “High Altitude suit” 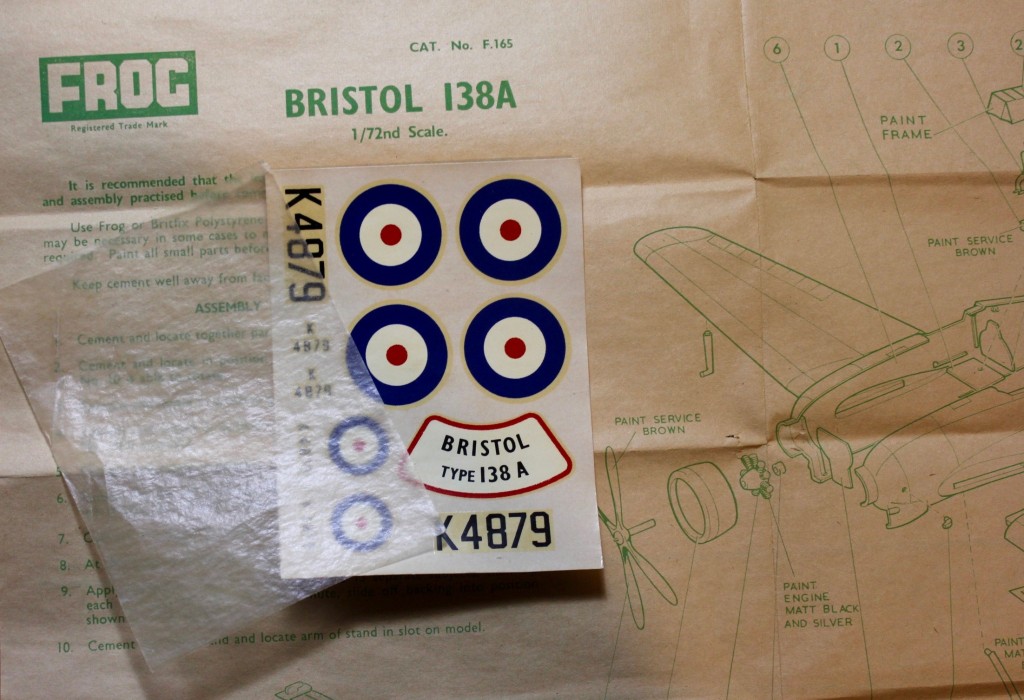 The decals are still mint after  sixty one years and with some care would still be usable.

The rather odd decal that Frog included in the Trail Blazer series. No mention of it was made on the box or instructions. 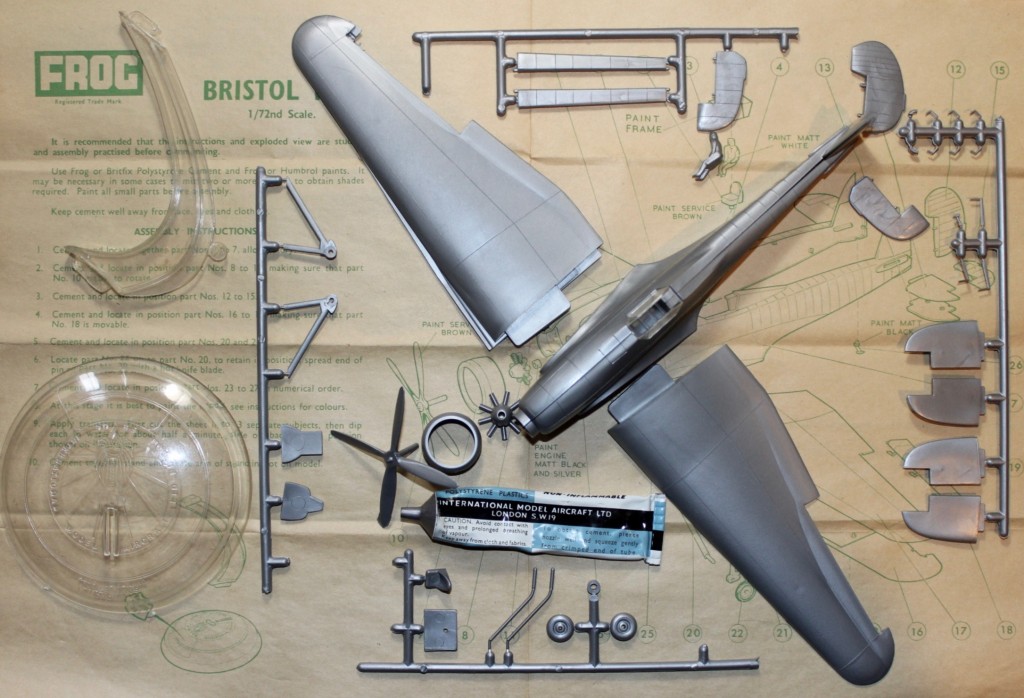 A Note on numbering

The first Trail Blazer is the S6B F164 however the Vickers Vimy has the number F163 which was issued after the S6B.

I have checked my primary source on Frog “Frog Model Aircraft Lines & Hellstrom 1989″ and can find no explanation. If anybody can cast further light on this mystery, please contact me.