Back in 1970 Frog released the Spin-a-prop set in order that modellers could add more realism to the kits they built. Initially three models carried the extra parts to enable them to be have this feature. They were the Beaufighter, Beaufort and JU88. Other models were planned including the Marauder and Venture but never released in this form.

The idea originally came from the Meccano die cast Spitfire and ME109 that were fitted with a Mabuchi RM-01 motor that could be started by a flick of a finger and stopped by touching the spinning prop. Totally  painless I can assure you. The mechanics behind this were simple, the motor only has one magnet and inertia plus 1.5 volts did the rest. You will notice the shaft is offset to accommodate this arrangement.  Both Airfix and Faller used the same system on their models.

Please see the video on this page to watch a motor running and hear a little bit more about the Spin-A-Prop. The motor in the short film is 46 years old and had never been run. It ran after just a few flicks of the Beaufort prop that was attached. A tribute to both Mabuchi and Frog.

I am looking to do another JU88 out of the box build and and my advice to any fellow modeller is to solder the joints. If a wire comes loose after you have closed everything up, it is nearly impossible to get to it without major surgery to the model. I know it happened to me.

It is interesting that Airfix have again released a motor for the 1/24 range of models but it is not spin-A-Prop technology and requires a micro-switch.

I cannot find any manufacturer that supplies Spin-A-prop motors but I am sure somebody  out there knows of one! 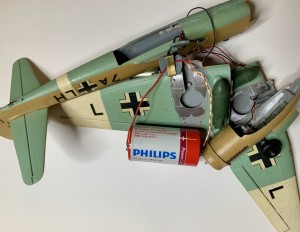 What happens when an internal wire comes off. 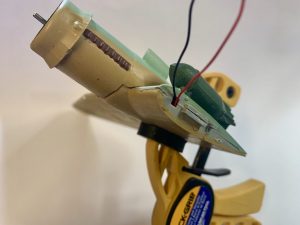 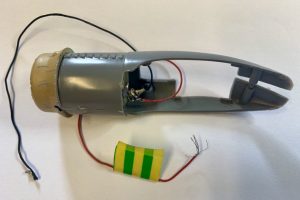 Due to the damage caused, by removing the motor from the original nacelle, a new one has been fitted from an incomplete kit I have. Yes everything will be soldered this time round. 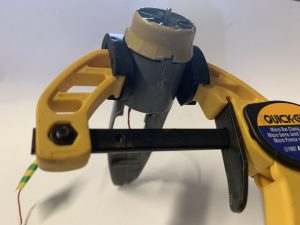 The new nacelle taking shape and awaiting filler and cleaning up.

A short video of the JU 88 Spin-a-Prop motors on test. Note the new starboard nacelle.

This time the model will have the wheels retracted, and new guns fitted. Matching the original paint is going to be a challenge to say the least, quite a bit of filler is also going to be needed.

I hope you enjoy the photos and short film and I would welcome any comments.