A further selection of photos from my collection starting with Frog’s E-Type Jaguar F600 first released in 1964. This model was motorised and had several other features including an opening bonnet and chrome plated parts. I have also shown the “Donetsk Toy Factory” version and instructions in Russian. The quality of the plastic and transparencies are good, also all the motorising parts are included, except that my example was lacking a motor.

Frog also produced Model Aeroplane Motors an example of the 150 of which I have in my collection is illustrated below.

Just before Frog’s moulds were shipped to the USSR, Remus (A UK company based in Slough) leased several moulds from Novo and released them on the UK market. The illustration below is of the Hurricane.

The Mighty Vulcan F354 was first released in 1958 the example illustrated is a 1965 issue that shared a box with the Valiant marketed as ‘The V Bomber’. A label on the box end showed the content.. Note the advert for a “Free” Knife” in the box . I also have an example of the Valiant in my collection that one day will be restored. 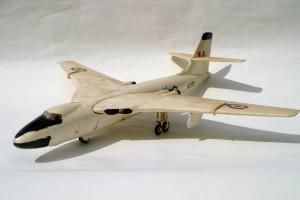 Awaiting restoration and a re-paint The Vickers Valiant from the V Bomber series, following a lot of discussion, this model it is going stay “As Found” as an example of how the younger Frog modellers made them ! A Westland Wapiti converted from the Frog Wallace F167 in my collection. The model depicts a Wapiti IIA K1291 ‘F’ of Number 27 Squadron RAF Kohat India in 1936. It just goes to show what can be done with the old Frogs I just noticed that the top wing has become detached during the photo shoot…

Frog Model Aircraft 1932 to 1976 The complete history of the flying aircraft and plastic kits by Richard Lines and Leif Hellstrom. This book is the definitive history of Frog.

Published by New Cavendish books in 1989. If you have any interest in Frog you need this book. This web site has relied heavily on it and I cannot recommend it enough. Sadly out of print copies do appear on Amazon & Ebay from time to time. The Frog story is not finished and the history of Frog in the USSR can now be told. I have now commenced writing Merton to Moscow The history of Frog spawn, although real life gets in the way I am making steady progress