The place for everything Frog and Frog Spawn

This is the 60th anniversary of Operation Musketeer. Hunter F5 WP130 was with 34 Squadron and flew out of Cyprus during the campaign.

It's a Novo issue of Frog's old F1. Pretty accurate but VERY basic. I left the solid cockpit as is but moved the pilot's head further forward and added a headrest. I scribed in the control surfaces on the wings as they were represented by raised lines!! The nose profile needed reshaping to be more tapered. I added the cannon troughs and I replaced the overly small jetpipe with a beautiful resin one from Aeroclub designed for the Revell kit. I also had a junk Airfix Hunter spare so I used its fin, tailplanes and airbrake.

The decals are a mix - the squadron badge and Suez invasion stripes are decals from a sheet given free with Scale Aircraft Modelling magazine in 1984. Serials and roundels from Xtradecal and stencils from a Superscale sheet. The kit has no wheel wells so I made decals for the undercarriage doors on my inkjet.

Why are the stripes under the roundels on the upper wing and over the id number underneath the wings?
Top

Great question but the only answer I can give is "because that's the way the RAF ground crew painted them on". In Operation Musketeer the stripes were painted on in the field and it seems the instructions must have been to NOT overpaint the roundels. In most cases, the underwing serial numbers were overpainted. On some aircraft they overpainted the serials and squadron colours on the fuselage too. For example, these Venoms 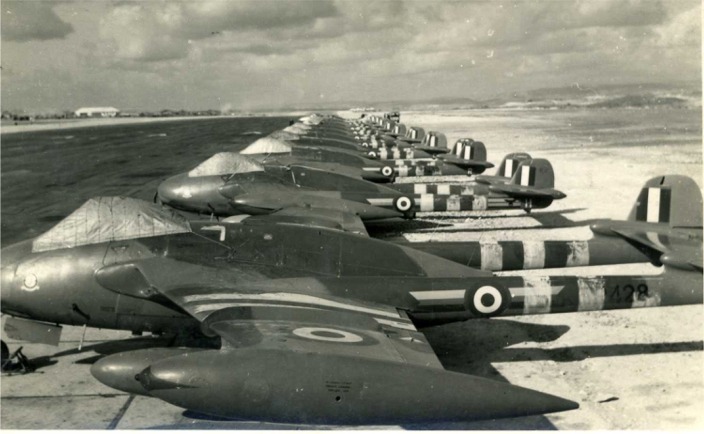 How interesting, It's not a period of history I'm too familiar with.
Top
Post Reply
4 posts • Page 1 of 1

Return to “My Models”

Users browsing this forum: No registered users and 1 guest